One key message that newly elected Chief Scientist Dr Cathy Foley wants us all to remember: there needs to be a changing dialogue to facilitate collaborations across our sector, enabling the passing of batons between science, industry and government to better support translation.

Science Meets Parliament is an annual event that fosters the development of ideas between STEM professionals and policy-makers, and was held virtually for the first time this year. Delegates attended lectures on the process of policy-making and received advice on communicating with Members of Parliament (MPs) and their advisors. Additionally, delegates were invited to virtual meetings with MPs who shared passions or interests in the delegates’ professional areas. Together with three other delegates, I had the opportunity to meet with Ms Emma McBride MP who also has a background in STEM as a former hospital pharmacist. We discussed the topics of employment opportunities in, and growth of, the Australian industrial research & development sector, diversity in STEM, and COVID-19 mental health care support strategies – all within 30 minutes, which was no mean feat!

My main takeaway from the workshops and MP meeting was that policy-making is a process that relies on human decisions. Whilst politicians may rely on data to support their decision making, STEM professionals can play an important role in clarifying the interpretation of the data and highlighting key areas that may have been overlooked in the creation of a piece of legislation, including its application in the real world. This is particularly important when decisions concern areas of high technicality. 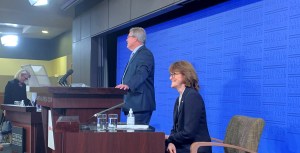 A highlight of the 2021 Science Meets Parliament event was the National Press Club Address in Canberra. Dr Cathy Foley gave her inaugural speech as Australia’s Chief Scientist, highlighting four key areas which she saw as critical in advancing Australia’s STEM capacity. These were: embracing the new digital tools of science, such as AI and quantum technologies; education and adopting new ways of learning; fostering diversity in the STEM sector; and improving access to information, such as increasing open access publications. Reflecting on the STEM sector overall, statistically, there is a lack of certainty in job prospects for women. Dr Foley touched on two critical points; firstly, she highlighted how critical it was to support women in their mid-career period, which can often be a hurdle or lull in their trajectory. Secondly – and striking a chord with me – Dr Foley spoke of “killing the angel in the house”, referring to how women are socialised to take on a “nice” or agreeable nature and therefore tend not to speak up for themselves – whether it be when they are experiencing harassment or not being adequately recognised for their work.

I was lucky enough to make it in-person to the National Press Club and see Dr Cathy Foley deliver her first address. During the event, the atmosphere was buzzing. Dr Foley spoke to themes which resonated with the audience. Her discussion was timely, reflecting current topics portrayed in media, science, industry and government including those of the COVID-19 vaccine, implications of a global pandemic and diversity of inclusion for women, to name a few. Much like Michelle, I too resonated with her messaging on social aspects of women’s roles in STEM and shining a light on empowerment and career prospects.

“There was a sense that not only was she championing collaboration within the science sector, between industries and government, but also for a collaborative workforce that helps to foster diversity in genders, races, abilities and backgrounds. For all the Science Meets Parliament delegates I spoke to, this was incredibly important.”

After the event, there was time to speak with fellow Science Meets Parliament delegates and debrief on the material covered by Dr Foley. There was agreement that the speech was authentic and reflected common themes of enablers, as well as roadblocks in science translation which is often discussed by researchers. We also reflected that whilst the vision was ambitious, it was also clear and feasible to achieve during her leadership period.

I was particularly captured by Dr Foley’s use of anecdotes and analogies. Working in a field with many complex considerations in the face of research translation, it is not often that you hear a short story that simplifies yet thoroughly captures the true landscape. With her clear and logical messaging, the media were also quick to adopt her anecdotes and analogies in press from the Address.

The most refreshing theme Dr Foley revisited throughout her speech was that of collaboration. There was a sense that not only was she championing collaboration within the science sector, between industries and government, but also for a collaborative workforce that helps to foster diversity in genders, races, abilities and backgrounds. For all the Science Meets Parliament delegates I spoke to, this was incredibly important. Diversity, and enhancing visibility of diversity within our industry, will help to address inclusion and empowerment, including for Women in STEMM. We need to all be working together. As Dr Foley commented, “Discovery happens in small teams. But innovation and impact need bigger teams”. Diverse teams with different experiences are essential because, “Simply put, diversity of ideas and experience equals better results”. 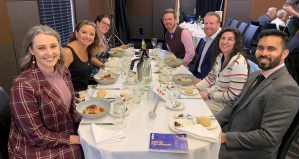 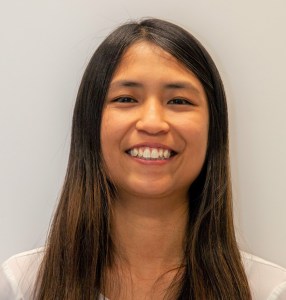 Dr Michelle Ta currently serves as Scientific Advisor at Otsuka Australia Pharmaceutical. Her professional goal is to optimise health outcomes and quality medicine utilisation by working with patient groups and the medical community. She gains energy from sharing knowledge with others and is passionate about growing the next generation of STEM professionals. 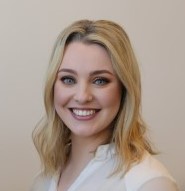 Dr Madison Paton currently serves as a Research Fellow at the Cerebral Palsy Alliance Research Institute. She is interested in applying stem cell therapies to treat babies and children with a risk of brain injury or cerebral palsy. Dr Paton is passionate about science communication, engaging with consumers and sharing the best available evidence on stem cells.